A Keynote Address by The Honourable Chrystia Freeland, Canada’s Deputy Prime Minister and Minister of Finance

A Keynote Address by The Honourable Chrystia Freeland, Canada’s Deputy Prime Minister and Minister of Finance

The Empire Club of Canada Presents:
A Keynote Address by The Honourable Chrystia Freeland, Canada’s Deputy Prime Minister and Minister of Finance

The Deputy Prime Minister will deliver a keynote address on the Canadian economy, with a focus on the global challenge of inflation and the steps the federal government is taking to make life more affordable for Canadians. 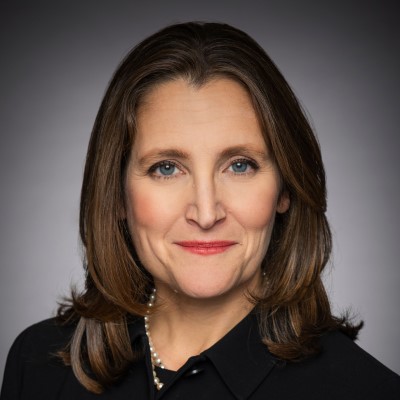 Deputy Prime Minister and Minister of Finance, Government of Canada

From November 2015 to January 2017, Ms. Freeland served as Canada’s Minister of International Trade, overseeing the successful negotiation of Canada’s free trade agreement with the European Union, CETA. From January 2017 to November 2019, she served as Canada’s Minister of Foreign Affairs. During this time, she was a leading advocate for democracy, human rights, and multilateralism around the world.

As Foreign Minister, she led and successfully concluded the renegotiation of the North American Free Trade Agreement (NAFTA) between Canada, Mexico, and the United States.

An esteemed journalist and author, the Deputy Prime Minister was born in Peace River, Alberta. She was educated at Harvard University before continuing her studies on a Rhodes Scholarship at the University of Oxford.

In 2010, she joined Canadian-owned Thomson Reuters. She was a managing director of the company and editor of consumer news when she decided to return home and enter politics in 2013.
Ms. Freeland has written two books: Sale of the Century: The Inside Story of the Second Russian Revolution (2000); and Plutocrats: The Rise of the New Global Super-Rich and the Fall of Everyone Else (2012). Plutocrats has been an international best-seller and won the Lionel Gelber Prize and National Business Book Award.

In 2018, the Deputy Prime Minister was recognized as Foreign Policy’s Diplomat of the Year. She was also awarded the Eric M. Warburg Award by Atlantik-Brücke, for her achievements in strengthening transatlantic ties. In 2020, she was awarded Freedom House’s Mark Palmer Prize, in recognition of her years of work in championing democracy and human rights.

Ms. Freeland speaks Russian, Ukrainian, Italian, French, and English. She lives in Toronto with her husband and three children.